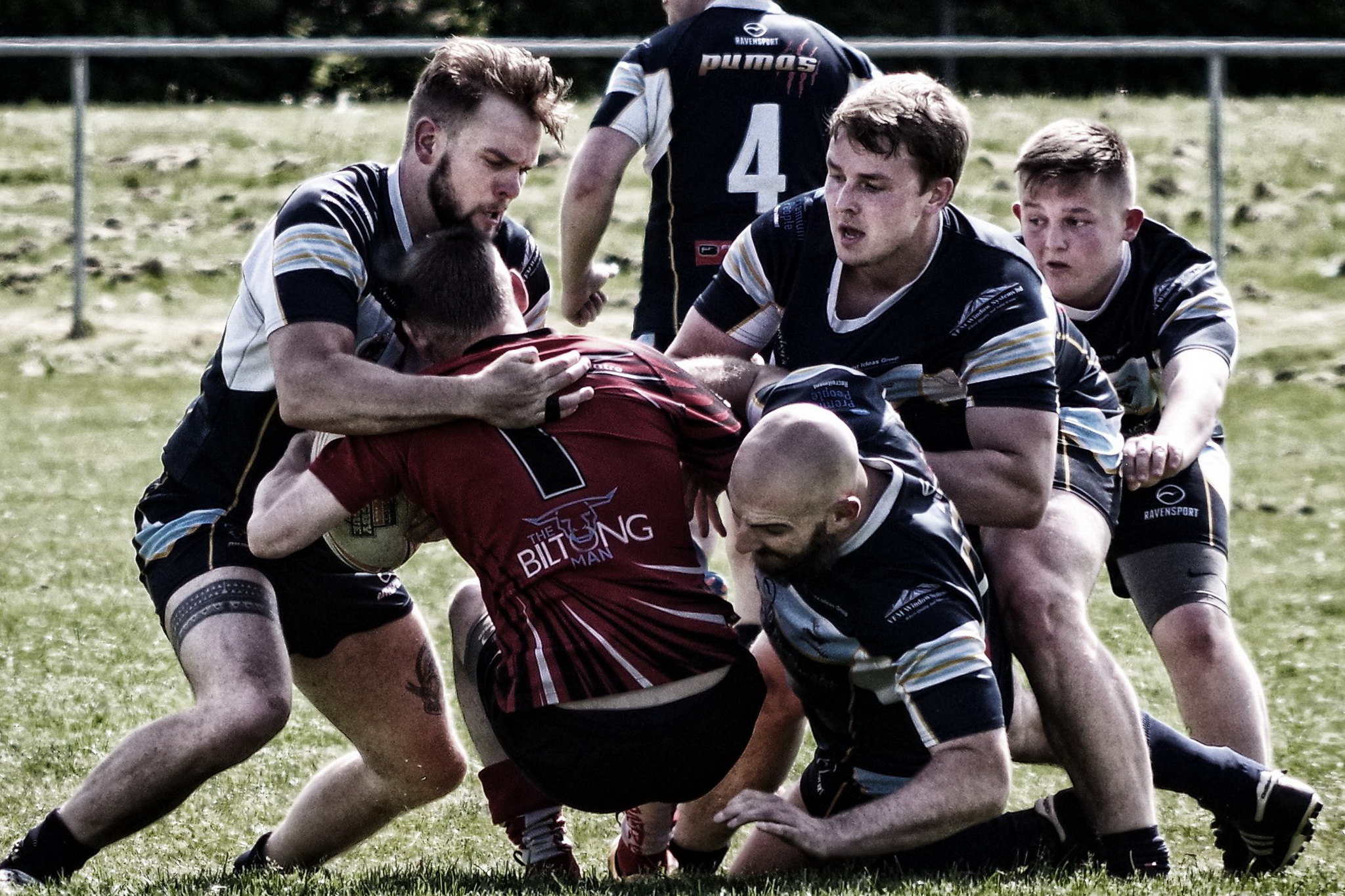 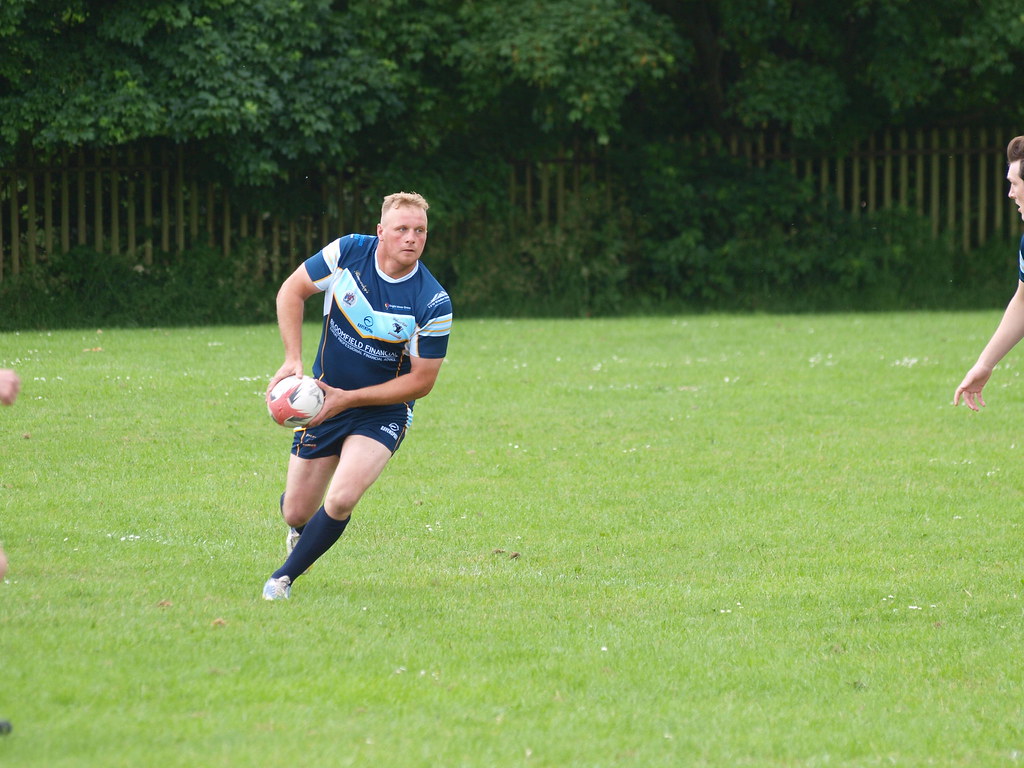 The Pumas Open age still in transition and rebuilding with a host of teenagers gave up a home fixture at their state of the Art Helford Road Facility to play at the North Easts Union HQ, kingston Park on their artificial pitch.  As has started to become a habit, th Pumas Dominated the first quarter playing traditional wide entertaining Rugby and opened the scoring with and had a couple of other touch downs chalked off.  Cramlington hit back with 3 break away tries against te run of play and Peterlee hit back to take the halft time score to 18 8.  The second half saw the Pumas self discipline fall apart from a playing point of view and the team seemed unable to complete set after set and despite some bruiging defence that continually turned the ball over the Pumaas skills levels were just not up to scratch.  despite this another 4 touchdowns were chalked off for one reason or another and Cramlington were able to keep hitting on the break and scoring on the back of Pumas handing errors which must corrected asap for the rebuilding process to continue.  Man of the Match performance in a struggling side, Scotland Studen International Niall Sidney, at just 17, making his open age debut ghosted past the Cramlington defence several times but wasnt able to find support to capitalise.

The Pumas juniors also took the field on Saturday, the Littlies section travelled to the Whitley Festival and the very growing side got a couple of wins and a draw and a loss in the ever growing section which is set to expand again after they host their schools festival on Tuesday at Helford Road which is set to host 14 schools following a massive effort over the last 2 years building the school links up and volunteer coaching in schools having had a disastrous previous 3 years when there had been very little development done in the area.  The Pumas 13s went back up to Cramlingon buoeyed by thier first win but once againt the squad was light due to holidays and injuries and just couldnt manage to get going.  Never giving up the pumas battle hard but do need an influx of players to make the squad numbers more consistant.  Man of the match performance for some immense last ditch tackling and hard running in attack Jack Hillary.

The 15s closed the weekend off having to back up with a last minute win against Durham Tigers away on Wednesday night they had to face the team to beat in the league at the minute Winlaton Warriors.  Having lost heavily away to the side who put a massive improvement in this season the other week, a close fought battle flared up several times and several sin binnings were needed on both sides to keep a lid on things.  With just 8 minutes to go the Pumas pulled another late winnier out of the back to win 12-10, another massive improvement from the side who are getting better with every game.  Having to play mid week games is something that should not be required in such a small league however and this something that needs to be looked at with such a short season there is lots of scope to expand the playing months.

If you are interested in Playing for the Pumas, now is an ideal time to join at any age group as each side goes through an exciting rebuilding process Peterlee is the Place to be for Rugby League with the best playing facilities and club house in the regiona,a the Pumas have huge plans for improvement and expansion.  Contact This email address is being protected from spambots. You need JavaScript enabled to view it. or call 07903731901

Pumas Off to Winning Start The New Look Peterlee Pumas took on title contenders Durham Demons in their first league game of 2015.  Peterlee Opened strongly fielding several players at 16, 17 and 18 as well as one or two who pushed the average age level up some considerable way, the Pumas still looked a very young side.  Playing some strong attacking sets early on, Peterlee looked strong and were just unable to get that final pass in to score on their varied attacking sets.  Then Durham put a high bomb on thee last of what had been a strong defensive set from Peterlee restricting the visitors to their own 40m line but lack of communication between veteran winger David Grace and Young Full Back Anthony Lawrence saw the pair clash heads, flooring both players, Grace was left on the ground uncontious whilst play was allowed to carry on and Demons picked up the loose ball and ran under the posts as the Pumas went to the aid of their team mate.

Peterlee Hit back very quickly and werer 12 - 6 up leading up to half time but a penalty by second rower David Hughes lgave Durham Good field position and Durham managed to make it 12 all at the Break.  The Pumas Crossed the Demons line 4 times in the the opening 25 minutes of the second half using a combination of wide play, high bombs and short balls up the middle to take a comfortable lead of 32 12 and with 10 to go changes were rang to experiment with different positions.  Demons pulled two late tries back to take their score to 24 but the Pumas had enough to hold on and ran out 32 24 winners.  MOMs Jack Adamson for Peterlee and Hookder Josh Tucker for Demons but noteable contributions from 16 year old prop Callum Jackson making big yards alongside 17 year old Matt Yews at Second Rown and Hooker Kieran Taylor also 17.  20 year old Full Back Anthony Lawrence had his best game for Pumas to date despite taking out his own Winger David Grace.

The Pumas littles section travelled to Hunslet Hawks ground to play befre the nain Hunslet sids home game and at half time against Beeston.  The every growing primary school section took a strong contingent of supportin parents along with them and did ver The Pumas Started the day with the Pumas Primary School ages going to the Cramlington festival, playing as  under 9s and 11s some great future talent on show, winning 4 of the 6 games in the festival showing another consistent performance.  Durham Tigers came to Helford Road to take on the Pumas under 13s which is awash with new talent this season with many of the players new to the game for the first time.  A really tight defence only allowed the Tigers to Cross once for their 4 points but the Pumas attack was on form with a  44 point haul to take the spoils.  The Pumas 15s were due to play Durham Demons this week who couldn’t raise a side so instead the Pumas under 14s obliged them with a friendly, the older side won the game 44 4 but the result hides what a competitive and strong outfit the 14s are as many of the under 15s teams Peterlee have played have conceded more points than that and also provided some valuable game time against strong opposition.

The Pumas A team hosted Consettt Steelers in the North East Regional competition.  The Peterlee side were down to 12 men for most of the game but the lads played their hearts out in baking hot sunshine and took the win 54 48 against the Consett first team.  Finally the Pumas NCL side had to raid the A team for 4 players due to work and holiday commitments but all 4 acquitted themselves well and provide 3 of the 4 Pumas Tries.  It did however take too long to get into the game, Woolston simply overwhelmed the Peterlee defence in the first few sets building up a 58 4 half time lead, with the response from Peterlee coming from debutant Nathan Myers in the centre out wide on the left.

The 2nd haf was more frustrating for the coaches than the first in many ways as the Peterlee side had strong words with themselves and came out all guns blazing.  A huge improvement in performance, defensively still 2 or 3 soft tries conceded on the back of Peterlee mistakes but a much sterner defence held the home side to 34 points in the 2nd half whilst the Pumas attack posted tries through debutant 2nd rower Wayne Wild, Prop Richard Foster with a conversion from Paul Flynn and then the last word in the game came under the posts from Myers again who converted his own try.

The Pumas now have 3 games in a row at home, next week hosting top of the table Kells which will be a tough encounter but enough shown in the 2nd half of the game yesterday to show they can give a good a account of themselves.  11 games played and 11 to go in the NCL season, no other North East side has played at this level or this many games in one season before and it has been a really steep learning curve but Peterlee’s very young side are growing up faster than most and will continue to get better as they go.